I’ve rather neglected my blog this week due to other priorities, the main factor being that I started back to work.  This was after an absence of over 6 months, since son1 was diagnosed with leukaemia on 3rd May.  But son1 is about to move into the maintenance phase of his chemotherapy on Monday, and since his medication will all be orally administered at home, we should be able to get into a more normal routine.  I’m very glad he doesn’t need to have any more lumbar punctures or intravenous drugs.  His blood counts yesterday were finally high enough for chemotherapy to recommence on Monday.  This is 2 weeks later than planned, as his blood counts had been very low following the delayed intensification phase.

It did feel strange being back at work after such a long absence, but everyone was very welcoming and wanting to know how son1 is doing.  But over 1200 emails waiting in my inbox was not quite such a welcome sight.  The boys were already fairly settled in their routine, so it didn’t seem to cause them any issues.

It has meant that we need to have quick simple evening meals, so I’ll share what I made for tea yesterday.

Measure out water according to noodle packet instructions into a saucepan.
Add the contents of flavour sachets and bring to the boil.
Add the noodles and cook until liquid is absorbed.
Meanwhile slice the sausage and heat in a wok.
Add the sweetcorn.
Add the noodles.
Serve and enjoy. 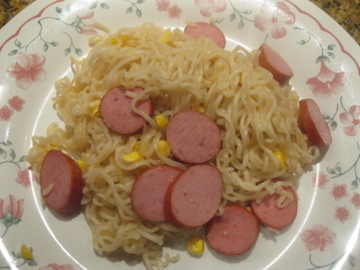 And finally here’s a photo of son2 from last weekend dressed as a knight. He went to 2 parties last weekend, one of which was a knights and princesses party. And son1 is going to a party tomorrow. 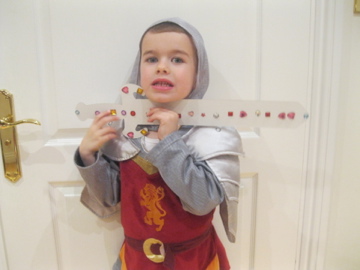 Son2 made a sword at the party

2 thoughts on “A busy week”