A Tattooed Mummy is running a competition for bloggers to post about a special toy in their life.  The prize is a Hide Away Rabbit which has been donated by Sian from The One Stop Bug Shop.

Well all the special toys in our household are our cuddly friends.  I may be a Mummy, but I still have a cuddly bear and dog on my pillow, who sleep with me each night, unless either of the kids have “borrowed” them. Beddy Bear is a wheat pack, so is functional for warmth, but I have no excuse for the dog.  He is purely my special cuddly toy. His name is Bungly and if I can’t find him at bedtime, I don’t sleep very well.  I can’t remember how long I’ve had him, but maybe about 10 years. My other half bought him for me, after my previous special cuddly toy, a hedgehog got lost on holiday in Bruges.  He was left on the hotel pillow whilst we went out for the day and he wasn’t there when we returned.  I can remember unsuccessfully trying to ask the hotel receptionist, who was probably thinking “crazy English lady”, whether my hedgehog had turned up in the laundry. 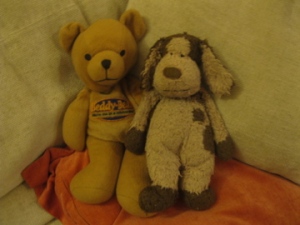 The hedgehog followed a list of previous special toys, the very first of whom is my most special toy of all.  His name is Snowy Bear and he is threadbare and mended in several places and now very fragile.  He therefore hides in a drawer most of the time, as I don’t think he would survive the attention of my kids.  I have had Snowy Bear since I was a baby.  I was so attached to him that when my sister was born, my Gran decided that she needed a Snowy Bear too.  But Gran initially couldn’t find one the same, so she asked a friend of hers to make one like mine. And subsequently found a shop selling one reasonably similar, so my sister ended up with 2 Snowys, although one did get renamed.

Roll on many years to the birth of son1.  We kitted his nursery out with a range called Sunshine Safari from Mamas and Papas.  And this included buying the cuddly Sunshine Safari toys. There was Slumber the Lion, Munch the Giraffe and Stomp the Elephant.   Son1 had lots of other cuddly toys too, but Slumber became his special toy.  However disaster struck when son1 was about 18 months old.  My husband had taken son1 away for the weekend to Littlehampton, whilst I was working night shifts and Lion got lost.  He wasn’t the only thing to get lost.  They also returned home with only one of son1’s shoes.  The expense of new shoes didn’t bother son1, but he couldn’t settle to sleep without Lion.

I posted Lion’s picture on the Toys Reunited website (run by Blooming Marvellous so this website no longer exists) but no joy.  By now the Sunshine Safari range had been discontinued by Mamas and Papas, so I couldn’t easily purchase another Lion.  However luckily I did manage to find one on ebay within a few days.  And son1 accepted the replacement, but we suffered about 2 weeks without a Lion.  Not wanting a repeat incident, I kept an eye out on ebay and managed to buy 2 more “spare” Lions.  This was also great for whenever Lion needed a wash, as a substitute was always waiting.

So once son2 was born, I had already decided that as soon as he had developed a bond with a favourite special toy that I would try to buy some “spares”.  This turned out to be much simpler than with son1’s Lion, as son2’s special toy was a Teddy Blanky from Asda.  Quick check on the website confirmed that this toy could still be purchased, but no point trying to order online, as it was listed with 2 other Blanky toys and Asda would choose which one to send. The others looked quite different. But a trip to Asda was successful and “spares” were purchased, even though the design of the bear had changed slightly.  A wise decision, as one day son2 came home with just the blue blanky, the original teddy had become unstitched from the blanky and got lost. 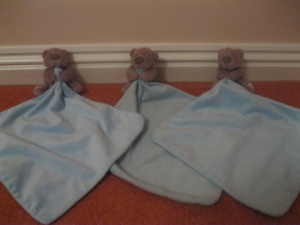 For a long time, the boys were unaware of the “spares” of their special toys, but were totally unphased once they realised they had a larger family of Lions and Teddys.  They both no longer rely much on the comfort of these special toys and have other special cuddly toys now too.  Son2 rotates which cuddly toys he takes to bed and it is not very often that he chooses the Teddy Blankys.  But son1 usually has one of the Lions in his bed and has relied more on Lion again since he was diagnosed with Leukaemia earlier this year, so Lion has accompanied us on all the hospital stays. 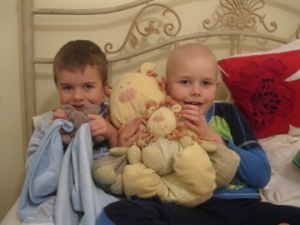 What a lot of Special Toys