Its that time of year when asparagus is in season and it is definitely on my shopping list since last year after son1 was diagnosed with leukaemia, I was told how asparagus is classed as a superfood for its cancer fighting properties. The season is very short – only about 8 weeks. When I see the PYO signs for asparagus, I always feel like summer is just round the corner, as strawberries are usually the second PYO crop. But I didn’t have time for PYO, so my asparagus is just from the supermarket.

As a child, I didn’t know that asparagus was a food. My parents had a perennial asparagus in our garden, but we never tried eating any of it. Instead my mum used it as greenery in floral arrangements. Very strange as my dad used to grow lots of other crops for us to eat such as beans, tomatoes, loganberries, rhubarb and gooseberries. So why did we never eat the asparagus? We also had a couple of apple trees and I had my own little plot. I can remember choosing sweetcorn seeds one year and then germinating them in the airing cupboard where it was warm and dark. 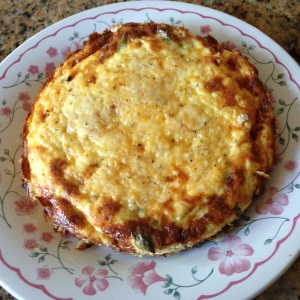 So I used some of my asparagus to make a frittata. For those who don’t know what a frittata is, it is similar to a very thick omelette or alternatively a quiche without pastry. It can be served hot or cold. I chose to serve it hot as a light meal with a side salad and flat bread. Since I had just received 3 free packs of Pilgrims Choice mature cheddar Crumbles in the post today to review, I decided to use the black pepper flavour cheddar Crumbles in this recipe. I thought they made it very tasty but I will be doing a separate review post on Pilgrims Choice mature cheddar Crumbles.

If necessary remove any woody ends from the asparagus spears.
Steam asparagus for about 5 minutes.
Beat the eggs in a jug.
Add yogurt and continue to beat.
Add a pinch of salt and mixed herbs.
Preheat grill to moderate heat.
Meanwhile heat oil on hob in a casserole dish (which is also suitable to go under grill).
Add the asparagus to the casserole dish and fry gently for a couple of minutes.
Pour the egg mixture over the asparagus.
Cook gently until it forms a crust underneath.
Then move it from the hob to under the grill.
Just before the top is about to set, sprinkle with the Cheddar Crumbles.
Continue to cook until it is set and the top is starting to brown.
Ease a spatula around the side of the dish and invert onto a plate.
Invert again onto another plate so the cheesy side is on top.
Cut into slices.
Serve and enjoy. 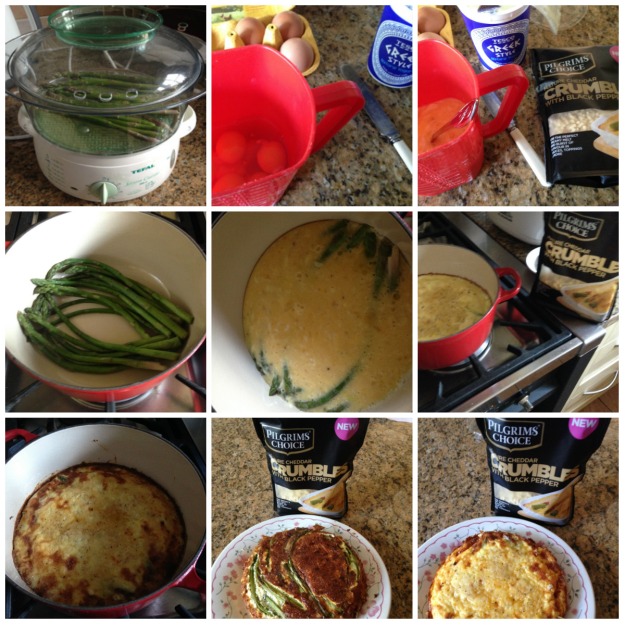 And since I’ve used yogurt in my recipe, I thought I would mention that this week is Yogurt Week. Love Yogurt have a competition running currently to Search for a Food Stylist.

Disclosure.  This post mentions products I was sent for free.  All opinions are my own.
And this is also my entry to the Food Stylist Competition.

Literally You
Just a mum

We’re here to share our passion for waste reduction, plastic reduction, and our journey toward living a greener, more sustainable life.

you didn’t ask, but I answered

Amanja Reads Too Much

comics, nonfiction, everything in between