Happy New Year everyone. I thought I’d start 2015 by sharing my thoughts on the latest book I have just read. I had plenty of reading time over the last few days whilst son1 was in hospital.

I joined the Mumsnet Book Club in November and before I’d even finished reading my first book “Falling“, I received a second free book to review. This time it is “The Girl Who Just Appeared” by Jonathan Harvey. 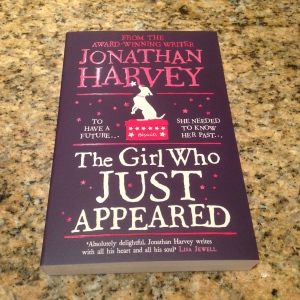 This is what it says on the back cover.

Holly Smith has never fitted in. Adopted when just a few months old, she’s always felt she was someone with no history. All she has is the address of where she was born – 32B Gambier Terrace, Liverpool. When Holly discovers that the flat is available to rent, she travels north and moves in. And in the very same flat, under the floorboards, she finds a biscuit tin full of yellowing papers. Could these papers be the key to her past?

Fifteen-year-old Darren is negotiating life with his errant mother and the younger brother he is raising. When the Toxteth Riots explode around him, Darren finds himself with a moral dilemma that will have consequences for the rest of his life.

Flitting between the past and the present, Darren and Holly’s lives become intertwined. Will finding Darren give Holly the answers she craves? Or will she always feel like the girl who just appeared?

This book starts in the present telling the story of Holly and we get almost a third through the book before we are introduced to Darren, the second main character. I won’t say much as I don’t want to spoil it for those who haven’t read it yet. Holly has discovered Darren’s diary which he wrote back in 1981 and is reading it. I found it harder to relate to reading about Darren, as I was already fixated on Holly’s story and wanted to continue reading about Holly. I still really enjoyed reading the book, but felt that perhaps Darren should have been introduced to the reader earlier. And the ending was guessable several chapters beforehand.

“The Girl Who Just Appeared” is by Jonathan Harvey who is a multi-award-winning writer of plays, films and sitcoms. He is a scriptwriter for Coronation Street. The paperback edition is currently on sale on Amazon for £3.85 compared to an RRP of £7.99. It is also available in kindle format. I do recommend this book. It is a good read.