My boys still haven’t mastered the skill of riding a bike yet, mainly due to the lack of opportunity. When we get free time, they prefer to go swimming. Son1 had a port implanted under his ribs when he was diagnosed with leukaemia and he is worried about bumping it if he was to fall off a bike. Meanwhile son2 hasn’t even attempted riding without stabilisers. So I wish that I had bought them balance bikes rather than trikes when they were toddlers. 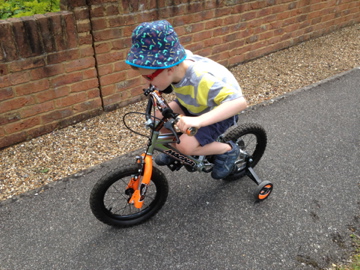 son2 on his bike

Although I’m not one to talk as I’ve never learnt to ride properly. My mum didn’t want me to have a bike as a child, as she had bad memories from her own childhood of her friend being killed by being knocked off her bike. But silly me, thought it would be easy to learn. So in my teens, when my friends suggested bike hire one day on holiday in the Lake District, I said yes. I soon realised it wasn’t as simple as I thought, so soon let everyone else go off for a ride whilst I either wobbled along on the flat or got off for the hills.

Roll forward 15 years and we decided to hire a tandem for the day. But I didn’t enjoy it much as I didn’t feel in control. I kept saying slow down and my other half said we were going so slow that we were more likely to fall off.

One brand of balance bike is Strider and when I looked at their website, I was surprised to see they also sell balance bikes for older kids and adults. I thought balance bikes were only for toddlers. So there’s a thought. Maybe I should get a balance bike. Hmmm.

Strider have organised a Championship Series this year. The first event took place in Birmingham last month.  You can see the photos here.

The second race in this year’s Strider balance bike Championship Series takes place at Kent’s fantastic Cyclopark on 6 September. The race is open to all Strider Riders ages 2-5 years old and it’s a fantastic and fun family day out. All riders will receive a medal and race plate to remind them of their day and the overall winner takes home a trophy! Under 2’s are welcome but race alongside those aged 2.

Entry is just £10 per child to the next race day, and tickets can be bought here: http://www.striderbike.co.uk/strider-championship-race.html

Strider balance bikes teach kids to ride safely, simply and securely and over one million have been sold all over the world, meaning Strider has taught more toddlers to ride than any other brand.

And I’m hosting a rafflecopter competition courtesy of Strider to giveaway an entry to the race plus bike hire which is worth £20.

a Rafflecopter giveaway Please click on the link to enter.

Disclosure.  Although I am hosting this giveaway, I have not received any product.  All opinions are my own.

Book blog. Mostly YA, but a little bit of everything.

No Time For Pants