I have received another book from the Mumsnet Book Club free to review. Or should I say 2 books, as I actually got 2 copies. One for my mum and one for me. A nice touch for Mother’s Day.

This time it is The Forgotten Summer by Carol Drinkwater. I never realised that Carol was an author as well as an actress. As a teenager, I kept a letter she had written to me on headed notepaper in reply to mine inviting her to come and give a talk at my school. Her busy schedule prevented it happening, but we did get a few famous faces. 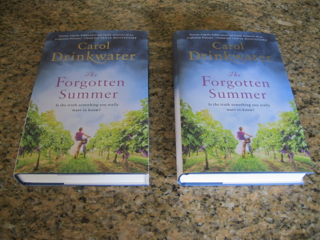 This is what it says inside the front cover.

Secrets ripen and fester over a long sweltering summer in France . . .

The annual grape harvest at the Cambon family’s magnificent vineyard is always a cause for celebration. But not this year. When an accident destroys the crop, leaving the estate facing ruin, Clarisse Cambon knows exactly who to blame – her daughter-in-law Jane.

It’s just the latest incident in a decades-long feud whose origin both women have concealed from Luc, who struggles to keep his wife and mother on speaking terms. But is Luc the saint he appears to be? When tragedy strikes, Jane is thrown into doubt. What secrets has her husband been keeping?

Forced to take charge of the ailing vineyard, Jane uncovers further proof that Luc may not be the man she fell in love with twenty years ago. And, worse still, she knows that her old enemy Clarisse is the only one who knows the truth . . .

I loved this book. I kept snatching a few more pages whenever I could. It has left me wanting to head to warmer climes and take part in the grape and olive harvests. Well I can dream can’t I.

The book is divided into three parts. It starts at harvest time which Luc is less involved in than usual, because he is also busy researching for his latest film project, a documentary on the Algerian War. So Jane is left reluctantly in charge when an accident occurs. One of the workers is bitten by a snake and a proportion of the picked crop is trampled in the ensuing chaos. Jane is blamed by her mother-in-law Clarisse, who declares the estate is ruined.

Jane returns to her other home in London. But tragedy strikes shortly before Christmas when Luc dies in a car accident near Paris enroute to England. Gradually questions surface in Jane’s mind. Who do the initials on a memorial card belong to? Luc’s lawyer reveals to Jane that Luc was heavily in debt, to the extent that she needs to sell their London home.

Part 2 begins 5 months after Luc’s death, when Jane returns to the vineyard, discovering the vines looking rather neglected. Initially planned as just a short visit to clear Luc’s personal effects, more questions set Jane haring after answers. And she feels obliged to stay to take control of planting. Clarissa remains bitter to Jane but finally gives her the answers, something that I’d worked out ages earlier in the book from all the clues.

Part 3 was harvest time again with an unexpected twist. And a few more chapters to draw the story to a conclusion. Plus an epilogue which looks back to Luc’s family fleeing from Algeria to France in 1962 once Algeria gained Independence. This is not a period of history that I know anything about but the story whetted my interest, so I’ve now had a brief read about the Algerian War on Wikipedia.

“The Forgotten Summer” is by Carol Drinkwater and is published by Michael Joseph, an imprint of Penguin Books. The hardback edition is currently on sale on Amazon for £9.99. It will be out in paperback in July and is also available in kindle format and audio cd. I loved this book and thoroughly recommend it. My best read of 2016 so far.

Carol Drinkwater has her own website here, which is well worth a browse. I discovered the lucky lady lives on an olive farm in the South of France. And she has written lots of books, so now to decide which to read next.

I have previously read the following books from the Mumsnet Book Club.
The Forgetting Time by Sharon Guskin
Pretty Baby by Mary Kubica
Coming Home by Annabel Kantaria
Fallout by Sadie Jones
Falling by Emma Kavanagh
The Girl Who Just Appeared by Jonathan Harvey

What a great idea. Each day of Lent, remove something from your home that you don’t use or wear anymore and place it in a bag. At the end of Lent once the 40 days are complete, donate these items to a charity shop or homeless shelter. #40days40items #payitforward #givingback #reuserepurposerecycle #consciousliving #preloved #declutter I’m going to do this. What is everyone else giving up for Lent?

open your mind to a growth mindset and new perspectives

The UK's oldest and most prestigious children's book awards. www.ckg.org.uk

Hello,everyone! This is a blog about fitness, healthy food, and all what we love. Here you will find advices, ideas and motivation to change your life. If you think it is impossible, you are wrong, you can do it!