I have received another book from the Mumsnet Book Club free to review. It is Himself by Jess Kidd. 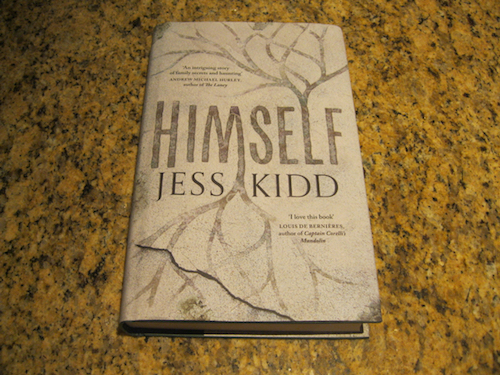 This is what it says inside the front cover.

When Mahony returns to Mulderrig, a speck of a place on Ireland’s west coast, he brings only a photograph of his long-lost mother and a determination to do battle with the lies of his past.

No one – living or dead – will tell Mahoney what happened to the teenage mother who abandoned him as a baby, despite his certainty that more than one of the villagers knows the sinister truth.

Between Mulderrig’s sly priest, its pitiless nurse and the caustic elderly actress throwing herself into her final village play, this beautiful and darkly comic debut novel creates an unforgettable world of mystery, bloody violence and buried secrets.

This book is really unusual as Mahoney, the central character can also see the dead. It starts with a prologue in 1950 when a girl is murdered in front of her baby. The main story is set in 1976 when Mahoney arrives in remote Mulderrig from Dublin, interspersed with historical flashbacks.

Mahoney was brought up in a Dublin orphanage and by the end of chapter 1, he has just found out that his mother was Orla Sweeney of Mulderrig. The reader is left to surmise that Orla was the girl murdered in the prologue. Mahoney finds out from old Mrs Cauley that nobody knows where Orla went and that his grandfather left when Orla was a child and his grandmother died 10 years ago and nobody admitted to being his father. But Mrs Cauley is also able to tell that Mahoney can see the dead. Neither of them believe Orla is alive, although Mahoney has never seen her amongst the dead either.

The book continues with Mahoney trying to discover the truth of what happened to Orla, both from the living and dead. He is sure that some of the villagers know the truth, particularly as some try to force him to leave, even attempting bribery. You’ll have to read it to find out more.

Himself is by Jess Kidd and is published by Canongate. The hardback edition is currently on sale on Amazon for £9.99 compared to an RRP of £12.99. It is also available in paperback and kindle format. I highly recommend this book. A really different great read.

I have previously read the following books from the Mumsnet Book Club.
The Fire Child by S. K. Tremayne
Noonday by Pat Barker
Missing Presumed by Susie Steiner
The Wolf Border by Sarah Hall
The Forgotten Summer by Carol Drinkwater
The Forgetting Time by Sharon Guskin
Pretty Baby by Mary Kubica
Coming Home by Annabel Kantaria
Fallout by Sadie Jones
Falling by Emma Kavanagh
The Girl Who Just Appeared by Jonathan Harvey

9 thoughts on “Mumsnet Book Club review – Himself by Jess Kidd”

Becoming a mum during a global pandemic x