Regular readers of my blog may remember that I recently reviewed the fabulous WonderKid Space Bumper Pack and ran a very popular giveaway for one. 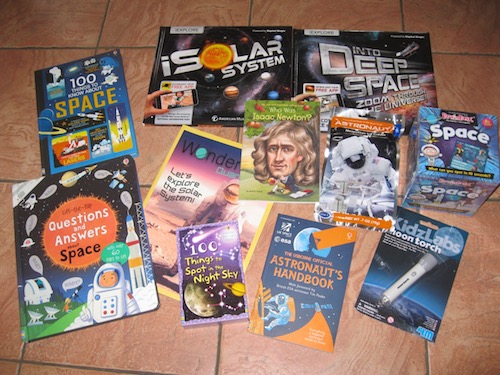 I am delighted to say that Anneka is the lucky winner. She correctly answered the following question.

In 2006 the International Astronomical Union (IAU) decided that Pluto could no longer be classified as a planet. What is Pluto now classified as?

And the answer is that Pluto is now classified as a Dwarf Planet.

And here are some facts provided by WonderKid about Pluto, the Dwarf Planet.

Pluto was considered a planet for 76 years. First discovered in 1930 at the Lowell Observatory in Flagstaff Arizona, the planet is named after the Roman God of the underworld. Wait a minute! Isn’t that Hades? No; Hades was the Greek God of the underworld. The name Pluto was proposed by an eleven year old schoolgirl from Oxford, England called Venetia Burney.

“I think Pluto would be a good name for it.” said the young Venetia at the breakfast table after her grandfather had read out the news of the planet’s discovery from The London Times on 14 March 1930. Venetia was familiar with Greek and Roman mythology and the name was apt as Pluto (the Roman God of the underworld) could make himself invisible and dwelt in a cold dark place where the sunlight did not reach.

The former planet Pluto orbits our Sun far out in an icy region of the Solar System called the Kuiper Belt. In the 1990s scientists began to find many similar sized objects in the Kuiper Belt. Some of the newly discovered objects were even bigger than Pluto. One such object, called Eris, was discovered in 2005. Astronomers had to make a decision on whether all of the newly discovered objects would become planets or whether they would have to create a new, narrower definition of a planet. They went with the latter.

In 2006 the International Astronomical Union (IAU) got together to decide what the definition of a planet should be. The IAU came up with a new three step test for whether an object could be classified as a planet in our Solar System:

1. Does it orbit our Sun?
2. Does it have enough mass to make it (almost) round?
3. Has it removed other small objects from around its orbit? (unlike asteroids)

Only if an object (which is not a satellite to a planet e.g. a moon) meets all three of these criteria can it be called a planet. Unfortunately for Pluto, and its fans, it only passed the first two criteria of the test and was no longer classified as a planet! However, in a way the Solar System became a more interesting place; now there was yet another type of object discovered spinning around the Sun – which astronomers called ‘dwarf planets’!

Let me remind you that I have a special offer to share with my readers. 20% off your first WonderKid box when you use the code BLOGGINGMUMMY20 at checkout. The code is valid for the first 10 people who take up the offer and is limited to one per person.

I’d love to hear about your favourite space facts or your ideas for themes to feature in future boxes.

Disclosure. This post mentions products I was sent for free. All opinions are my own.

4 thoughts on “Pluto the Dwarf Planet”

A latta words in little time