I have received a free e-copy of the book The Secret Life of Moles (and their friends) by Liz Burgess for son2 to review.

Long fascinated by their secret activities at home in her own back garden, and the fields surrounding it, she decided to explore this special underground world, and find out more about moles and their other little friends. Liz Burgess lives in South Yorkshire and The Secret Life of Moles is her first book for children.

The above sentence is what son2 has written for his review. I’ve also read the book, so let me give you a bit more insight into the book. It is a short 40 page chapter book with some very nice illustrations drawn by the author.

The expanding mole family are running out of space in their field, so young Ragwort decides to tunnel under a wall into unknown territory. He emerges in a much smaller tidier “field” with beautiful flowers, waterfall and pond which he decides will be the ideal place to move to. But things don’t go according to plan due to a rather cross Hbean, as moles refer to us humans.  He asks for advice from wise Hogknows, the hedgehog, who in turn asks the Wingthings (birds) and Climbing Fox (squirrel). All the animals get involved and vote on a plan.

A lovely tale from the viewpoint of the creatures involved. And the naming of everyone is just great.

The Secret Life of Moles is available on Amazon, currently priced at £5.99 in paperback and is also available in kindle format. Suitable for a wide age range. A delightful book to read out loud to your child or for them to read themselves.

Liz Burgess lives in South Yorkshire has enjoyed a varied career, including working for a UK Environmental Charity, the latter 10 years as a Director. She had always had a keen interest in nature especially small mammals, activities in her own back garden and the surrounding fields inspired her to write the Secret Life of Moles. Any reference to a moles natural behaviour in The Secret Life of Moles is correct according to Liz’s small amount of research. All the drawings were been done by Liz in pencil and ink.
At the age of 68, Liz enjoys hiking, birdwatching anything to do with wildlife. She has done quite a bit of foreign travel, including rain forests, jungles and was fortunate to see a ‘tiger’ in the wild. Liz retired at 60, previous to this she worked for an environmental charity for 28 years. Mainly involved with operational developments but she does have a background in Human Resources and Employment Law. 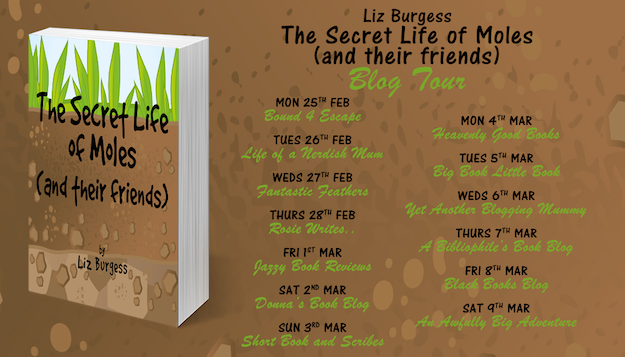 Disclosure.  This post is a review of an e-book I was sent for free.  All opinions are mine and my son’s own.

12 thoughts on “The Secret Life of Moles by Liz Burgess”