For my next personal choice of read, rather than a requested book review, I had decided that I wanted to select a title from the Black Lives Matter reading list. I had previously seen that Angie Thomas was shortlisted for the Carnegie Medal with her latest novel On The Come Up, but I opted to start with her first title, The Hate U Give. This is a multi award-winning book, having won both Children’s Book of the Year at the British Book Awards and the Waterstones Children’s Book Prize in 2018, plus the 2017 YA Books Are My Bag Readers Award. 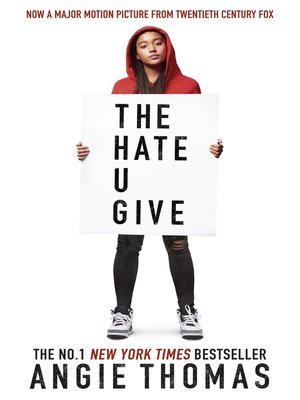 Sixteen-year-old Starr lives in two worlds: the poor neighbourhood where she was born and raised and her posh high school in the suburbs. The uneasy balance between them is shattered when Starr is the only witness to the fatal shooting of her unarmed best friend, Khalil, by a police officer. Now what Starr says could destroy her community. It could also get her killed.

Inspired by the Black Lives Matter movement, this is a powerful and gripping YA novel about one girl’s struggle for justice.

16 year old Starr Carter lives in the Garden Heights ghetto where gang fights and drug dealers abound, but attends a predominantly white private school, a 45 minute drive away. The two are worlds apart and Starr tries to keep them separate, portraying another personality, speaking differently at school and after one failed attempt, not inviting school friends home.

The story starts with Starr at a party in the ghetto where she bumps into her longterm childhood friend Khalil whom she hasn’t seen in ages, when suddenly gunfire sounds. They escape in Khalil’s car, only to get pulled over by a white police officer for a broken tail-light. The officer makes Khalil get out of the car, but when Khalil opens the car-door to check Starr is okay, the officer shoots and kills him, before pointing the gun at Starr, the only witness.

Nightmares follow. Starr is too frightened to speak out. Tension builds in the neighbourhood. Can she still juggle both worlds? Will she testify?

The Hate U Give is available on Amazon. I highly recommend this YA book, which is targeted at age 14+. A powerful read, inspired by Black Lives Matter. It portrays racism, victimisation, white privilege, prejudice, ignorance, gang warfare, riots, drug lords brilliantly. All the characters are well developed and the dynamics between them all are excellent.

I frequently had to look up slang, but that didn’t bother me, as its usage fitted the culture perfectly.

Life with kids and tech. Everybody likes a good story.

On Reading and Writing... mostly.

"I have enough time to rest, but I don't have a minute to waste". Come and catch me with your wise words and we will have some fun with our words of wisdom.

A complete guide to actualizing your potential