We were delighted to be offered the chance to visit Dinosaur World Live for free, courtesy of Let’s Go with the Children.

We attended this show at G Live in Guildford. There were free stickers for all the children plus a range of dinosaur merchandise available to purchase. Son2 had come prepared with 3 of his cuddly dinosaurs, but he still managed to persuade us to buy another for his menagerie, this time a triceratops.

Leading lady Miranda played by Elizabeth Mary Williams is supported by a team of puppeteers who skilfully control the dinosaurs. These range from small handheld puppets to the huge 10m long T-rex. Miranda draws in the audience right from the start when she places a dinosaur egg at the corner of the stage, asking everyone to call her name if it looks like hatching. Of course there are plenty of false hatching alerts throughout the performance. Miranda weaves her magic, telling us about the dinosaurs she grew up with who have come from a far-off island, introducing each one in turn. 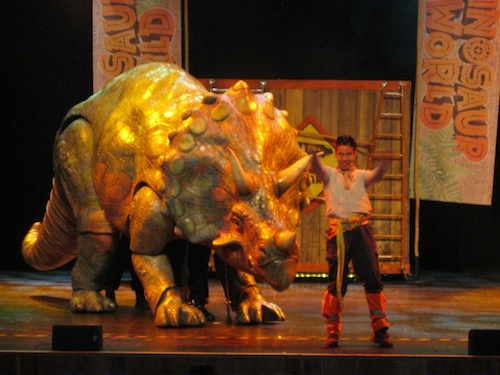 The large triceratops was son1’s favourite whilst the huge T-rex was his Dad’s favourite. We did get to meet baby versions of both of these earlier.

A few children are invited up onto stage to participate in activities like feeding or tickling a dinosaur. It was nice to see that they weren’t all from the front row. We all got the chance to roar. And at the end of the show, there was the opportunity for all children to meet and touch some of the dinosaurs – a large one on stage and 2 small ones in the foyer. 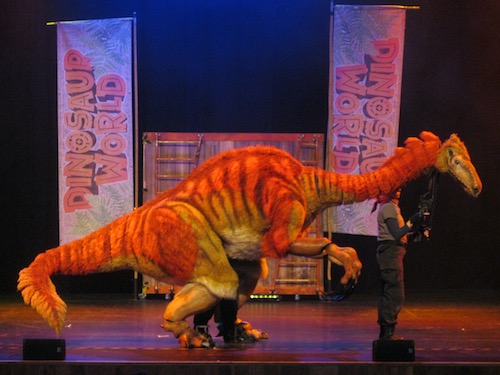 It was a fantastic interactive performance and dinosaurs looked so realistic, that you almost forgot the puppeteers standing there. Miranda had the whole audience mesmerised, even the youngest children were watching in awe.

The audience were actively encouraged to take photographs during the performance, although mine were shared afterwards as I had already discovered before the start that there didn’t seem to be any internet connection in the venue.

Suitable for all ages from 3+ and just under an hour long. Not too scary or loud, although I did notice some small children in front of us wearing headphones. With some lighting effects and smoke.

This show is touring round the country and I do highly recommend that you take your children to see it.

Son2’s favourite part was when the dinosaur egg finally hatched just before the end and then its mum turned up. He loved the tiny voice of the baby as the two communicated together. In fact, the puppeteers all had marvellous ventriloquist skills with different sounds for each species.

And G-Live is a very nice modern venue, with a large tiered auditorium. It does have it’s own carpark, but there were only a few spaces left when we arrived half an hour early, so do allow plenty of time before the performance. It also has its own cafe which we didn’t sample as well as a bar. We checked that drinks could be taken into the show.

I’d love to hear what is your favourite dinosaur. Mine is the brontosaurus.

This review also appears on https://letsgowiththechildren.co.uk

Disclosure. This post is a review of a show which we saw for free.  All opinions are my own.

When we were offered the chance to review a couple of children poetry books, I knew that son2 would jump at the chance, since Mustard, Custard, Grumble Belly and Gravy is one of his favourite books. He chose The Bedtimeasnaurus, written by Mike Bayliss and illustrated by Megan Egan. What a fab title. 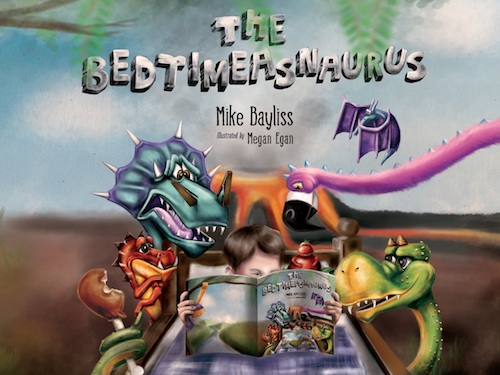 A charming collection of gorgeously illustrated poems to encourage fun and bedtime bonding between parents and their children.

The bright pink flamingoasaurus spends its day standing on one leg looking for something to eat. The round and delicious tomotoasaurus sings a tune while soaking up the sun. These are just two of the imaginative and amusing dinosaurs dreamed up in The Bedtimeasnaurus, the sometimes naughty and always hilarious poetry collection for children by Mike Bayliss.

Developing the idea for over thirty years while working on other projects , Bayliss was encouraged to publish his collection after being diagnosed with stage IV non – Hodgkin lymphoma in April 2017, using his work as a positive outlet for his energy as he worked to battle the illness.

Complimented by charming illustrations, opportunities for kids to draw their own dinosaur creations and simple quizzes on each of the characters, The Bedtimeasnaurus not only provides an entertaining read for young children before they go to sleep but also offers a valuable chance for parents to connect and engage. 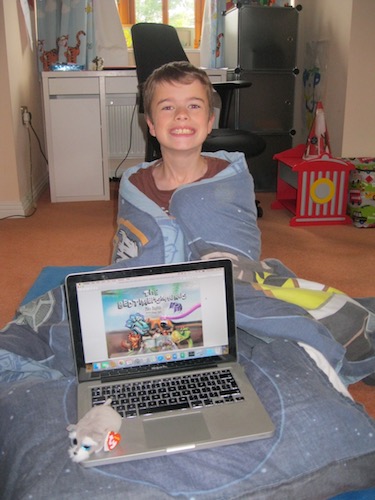 I like this book because it is very funny. My favourite dinosaur is the Pumposaurus because it farts a lot.

The two sentences above are what son2 has written for his review. He doesn’t share much with us about the book, so let me explain. It is all about funny made-up dinosaurs and has been written in verse.

After the verses, there is a quiz about all the dinosaurs in the books, along with a couple of blank pages for each child to draw their own Bedtimeasnaurus along with a funny poem about their dinosaur.

Son2 has invented the mean green Mumosaurus. Should I be worried? I’m hoping his outlook on Mumosaurus being mean is just temporary, based on a misunderstanding with Clink Street Publishing, when he just got an e-version of this book rather than the actual paperback that he was expecting. In his eyes, this was all my fault. Although I have to say that I would definitely recommend a paperback copy over the e-version in this particular case, as we did experience a few technical issues. Firstly, it was too small to view on my iPhone, as it seemed to have some double page landscape formatting which wasn’t working properly. Then neither PDF nor mobi format would download from dropbox to the iPad. So we resorted to PDF on the computer, which still frustrated my son as the page breaks weren’t working correctly.

This lovely collection of dinosaur poems by Mike Bayliss is going to bring a smile to kids, especially the more cheeky “toilet humour” ones. It has been beautifully illustrated by Megan Egan.

However I’ve never come across the word “pumping” in this context, and if it wasn’t for the illustrations, I think this would be confusing to readers.

Due to be published tomorrow, The Bedtimeasnaurus is available on Amazon, currently priced at £8.30 in paperback. Suitable for a wide age range. A lovely book to read out loud to your child at bedtime or for them to read themselves.

Born in Walsaill West Midland, UK, Bayliss is an entrepreneur that owns companies in several industries including building supply and property development. He also owns Bespoke Brewery, which opened in 2012 and has since won a number of awards for its craft beer. He lives with his wife and three children in Forest Dean, UK. This is his first book. 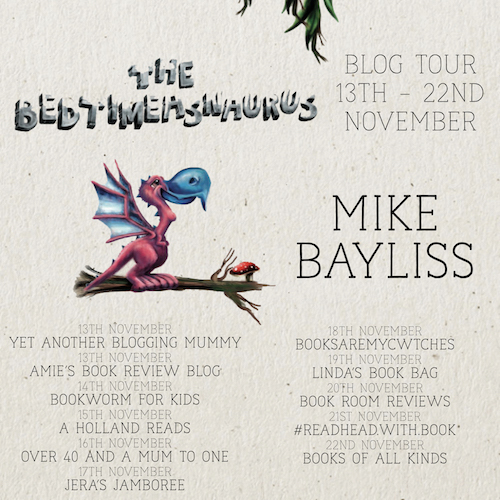 My children are very pleased as I have received a party bag from Prehistoric Presents to review. This is not your typical plastic or paper party bag filled with cheap plastic toys and sweets.  Instead it is a good quality cotton bag with a dinosaur design, complete with label tag.  It contains 4 rock and fossil samples plus a toy dinosaur and tattoo.  The samples are in individual small drawstring bags, each with an information card.

The fact that one of the samples was Dinosaur Poo had my children in fits of giggles, so very well targetted at young children of school age. They are both interested in dinosaurs and enjoyed handling all the specimens.

I was very impressed with this bag. Get them if you are having a dinosaur theme party.  However you will pay more for this type of party bag than usual. They cost £9.50 each, although there is an unspecified discount for multiple orders. So if you’re doing a kids party on a shoestring, with 20 plus kids, these are not the bags for you.  But great if you’ve only got a few kids coming.  Also it would work well as a “Pass the Parcel” prize.

Personally I do like to avoid giving a party bag of cheap plastic toys, so this definitely ticks the box. I usually fill a bag with a book, sweets and something like stickers or pencil. However for the last birthday party, I gave zipped bags filled with stationery. These had a retail price of £9.99 but I purchased them in the sale at £1.40 each. So although I’m happy to give party bags which look expensive, I would be reluctant to spend more than about £3 per child, as we’re still at the stage of inviting about 30 kids to parties.

Prehistoric Presents have subsequently sent me one of their luxury gift bags to also review. And they have advised that their party bag has now been rebranded as a party gift bag.  The luxury gift bag contains 6 larger rock and fossil samples plus a good quality magnifying glass. The samples again are in individual small drawstring bags, each with an information card.

The boys of course were delighted to get Dinosaur Poo again, particularly now that they can have one each. And they enjoyed examining everything through the magnifying glass. 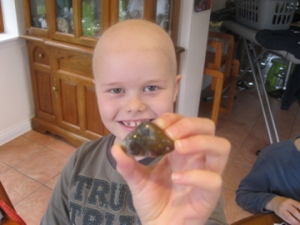 The luxury gift bag costs £19.50 and can be personalised with a hand stencilled name at no additional charge.  This would make a lovely and novel Christmas present.

Prehistoric Presents also sell a range of beautiful fossil jewellery, that is definitely worth a look.

And I’m hosting a rafflecopter competition to giveaway filled gift bags courtesy of Prehistoric Presents to four lucky winners.  Two people will win a luxury gift bag each and two will win a party gift bag each.