I have received a free e-copy of the book Chrissy à la Carte by Genevieve Lerner to review. You may find out more about the author on her website. 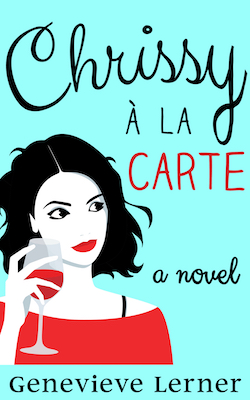 Chrissy’s life is the dictionary definition of A Hot Mess.
She’s homeless, unemployed, broke, extremely single…and now she has to live with her parents!
What could be better?

…Literally, anything.A year after college graduation, Chrissy ends up where she hoped she would never find herself: back on her parents’ doorstep. She magically lands a job at the Netflix show “Let’s Cook! with Derrick Longjohns,” and prays it will be a one-way ticket to her dream culinary school.

But her job turns out to be nothing like she imagined, especially when she runs into a very attractive, very bicep-y stranger. Unfortunately, she is Clumsy McAwkwardson, and has a bad habit of spilling Fanta all over herself. Super attractive.

Now, she just has to pretend to be a good employee. And stay on Mom’s good side. And impress her perfect sister, Paige. And help plan Grandma’s (seventh) wedding. And somehow, some way, convince everyone that she has it all under control.

The story starts a year after Chrissy graduated. She hasn’t managed to hold down a job for more than 3 weeks, is homeless and broke, so she does what she vowed never to do and moves back in with her parents, who she hasn’t spoken to in the last year. And guess what, she has arrived back the day before her grandma, usually resident at a nursing home, also comes to stay for the few weeks before her 7th wedding. Her successful sister Paige is a producer on a TV cookery show and gets Chrissy a job filing the recipes there. Chrissy is terrified on her way there the first day – has she remembered to use deodorant, will she get drug tested for eating a poppy seed muffin, etc. But even she is surprised to discover her workstation is an upside down bin for a desk and a cardboard box for a chair in a room reminiscent of Harry Potter’s cupboard under the stairs.

We soon discover that Chrissy manages to get into plenty of hilarious predicaments. On her first day in the new job, she soaks her trousers with the unisex toilet auto-flush so that it looks like she has peed herself. She is then climbing the wall backwards attempting to dry them under the hand-drier when a hunky guy walks in. The only thing she seems to excel at is cooking and her dream is to go to culinary school.

Chrissy à la Carte is available on Amazon, currently priced at £11.63 in paperback and is also available in Kindle format. A fun read that really got me laughing throughout.