Guest post by Jane Evans, author of “Vera McLuckie and the Daydream Club”.

I’d like to think I was a rule follower at school, not a rule breaker; pretty much every report card I got during my primary years contained the word conscientious.  Back then, I didn’t even know what it meant but I knew it was good because my parents would reward me with a big smile and a hearty “Well done!”

To be honest though, my conscientious exterior probably had more to do with the fact that I grew up in the UK in the 1970’s, a time when corporal punishment was still dished out daily, even to primary-aged kids.  I tell my 8 year old daughter this and she just looks at me like I’ve stepped out of the Victorian age.  Couple this with the fact that I had a headmaster who was actually called Mr Fear (I know it’s like something out of a Roald Dahl book but it is true), I think my well-behaved nature had more to do with survival than being an inherent goodie-goodie.  I was genuinely terrified that I would be summoned to his office for a stern talking to, or worse still, six of the belt.  Ouch!

Despite my best efforts, I was not a perfect saint at school.  Thank goodness!  I remember an early attempt at honing my hair-dressing skills in Primary 2.  Aged 6, my friend Elizabeth and I decided to give each other some rather stylish (or so we thought) fringes.  Armed only with the rather blunt, round-tipped scissors that are standard fair in any primary classroom (anyone who’s ever used these will know that they do not cut anything well) we happily hacked away at each other’s hair.  Until our teacher caught us in the act.  I can’t remember the punishment – to be honest, I think the teacher thought that our dodgy haircuts were punishment enough.  On reflection, I think I got off rather lightly with a slightly wobbly fringe– Elizabeth clearly had far better scissor skills than I as her hair took months to look anything vaguely like normal again.

Perhaps my worst offence at school was over the Lord’s Prayer.  I’d learnt it by rote, off by heart, over years of having to say it over and over and over.  Or so I thought.  But when I was finally asked to write it down, aged 9, it became apparent that I had (ahem!) misheard some of the words.  I remember (yet another) terrifying teacher, Mrs Brown, a stern woman who had yellow teeth and even yellower fingers from chain-smoking Benson & Hedges, calling me to the front of the class and asking me to recite my version to my assembled classmates.  “Our Father, who art in Heaven, Harold by thy name …”  It’s no great surprise that she stopped me right there.  The class howled with laughter as my face burnt with shame.  For punishment, she made me write out the correct version ten times and got me to lead the class in its daily recital for months after.  To this day, I still cringe when I hear it.

It was only when my daughter Grace started school that I began to remember my own school experiences afresh.  It’s fair to say that, overall, I had a fairly easy ride.  Yes, I got into trouble from time to time but I, for the best part, enjoyed school, loved to learn and found it all pretty straightforward.  But now, through the eyes of my daughter, I began to see how different every child in a standard class could be, with some finding school far trickier than others.  Despite these kids having their own individual talents, they’re often the ones who end up getting into trouble, for not listening, fidgeting, daydreaming or other more challenging behaviours.

With a bit more time on my hands now Grace was at school, I decided to start writing again.  I ended up doing lots of research on specific learning difficulties (the umbrella term used by schools for dyslexia, dyspraxia, autism and ADHD) and it became clear very quickly that, while there were a lot of great books out there for adults and teens, there wasn’t much for younger, primary-aged children who wanted to read a good story about kids they could easily identify with, characters they could easily see themselves in.  Real kids with real challenges.   Not princesses or ace footballers but real kids, just like them.

And that’s when Vera McLuckie and the Daydream Club popped into my head, a story about three friends each of whom have a specific learning difficulty.  In class, Vera is constantly being told off for daydreaming.  But it’s her daydreaming that fuels her imagination and allows her to take her and her friends, Harry and Max, on the most wonderful adventures.  The message of the story is plain and simple; that we’re all good at something and that we all deserve a chance to shine and be accepted for who we are.  My hope is that Vera and her friends will help those kids that feel a bit different.  And that can only be good.  As human beings, we all seek to feel understood.

I wish someone had told me this at school.  Who knows, I might have been less scared and even dared to be a little more naughty!

And you may read our review of Jane’s book here.

I have received a free copy of the childrens’ book Vera McLuckie and the Daydream Club by Jane Evans for son2 to review. Penguins are one of his three favourite creatures, so he was delighted to see some on the front cover.

Vera McLuckie and the Daydream Club written and illustrated by Scottish duo Jane Evans and Ruth Mutch follows the adventures of lively young characters who display dyspraxia, dyslexia and autism including Vera McLuckie —who hates school. Mainly because she struggles with stuff the other kids find easy. Oh, and because she keeps getting into trouble for doing what she is really good at…daydreaming.

The two sentences above are what son2 has written for his review. He doesn’t share much with us about the storyline, so let me elaborate. This story is about a primary school girl Vera McLuckie who has a penguin adventure with her two best friends Harry and Max. Although not explicitly mentioned in the book, all three have learning difficulties. Vera has Dyspraxia, Harry is Dyslexic and Max has Asperger’s and we see how they often get picked on by Bethany, the coolest, cleverest child in the school. In the adventure, the children see a fantastic swimming display by the penguins, but hear how sad they are to be teased by the other birds, for not being able to fly. This gives Vera a light-bulb moment regarding their own talents. But is the adventure, real or a daydream and how will Vera succeed in putting her story-telling talent into words?

At the back of the book, there is a mission to find 15 tiny penguins hidden in Ruth Mutch’s lovely illustrations and follow the instructions to unlock the code word. With some help, son2 had great fun doing this challenge, although it certainly took some time, as the penguins are very well hidden.

And son2 has drawn a cute picture of the three penguins. 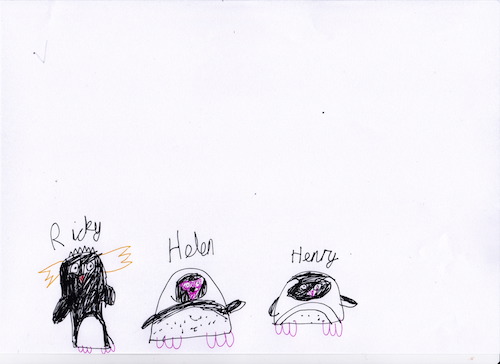 Vera McLuckie and the Daydream Club is published by Your Stories Matter and is available on Amazon, currently priced at £6.99 in paperback. Targetted at children age 7-9, this a lovely story in its own right, that a lot of children may identify with. But it is also a learning resource that can assist teachers or parents in positive discussion with younger children, what it is like to have a learning difficulty. This should help to raise awareness and improve understanding of neurodiversity.

About Your Stories Matter: Based in Kendal, Cumbria Paul Johnson is the founder of Your Stories Matter and the parent publishing company Explainer HQ —which provides creative video, audio, animation and print to the business and education sector. All Your Stories Matters titles are published in paperback and are available to order from online retailers including amazon.co.uk.

And some of the illustrations are available to download as colouring sheets here.

Yet Another Blogging Mummy

And you may see a guest post by author Jane Evans, sharing her thoughts on being a little bit naughty on my blog here.

Book reviews and recommendations that read like a great conversation with friends.

A witty and honest parenting blog about a life raising boys.

This is an Art Blog covering many topics to do with art, how to draw and paint tutorials, style, as well as creativity in general. We blog about art, photography, recommend related products and give our best SEO tips for artists and bloggers. We'd love to hear from you so get in touch if you want to start up a conversation or a collaboration!

My escape from reality reading books