About 10 years ago on holiday I was introduced to the concept that you could make your own teas when I was offered cups of sage tea made with sprigs of freshly picked sage. Back home I adapted the idea to make my own mint tea using fresh mint from my garden. Ever since, I’ve always been very open-minded to trying different flavours of tea. So I was delighted to have the opportunity to sample some Mirabilia organic olive leaf tea.

I love using olive oil, but I’m not that keen on eating olives, although son1 absolutely loves them. Read on to find out what would I think of olive leaf tea?

I received a free 30g packet of Mirabilia organic olive leaf tea to review. This is a premium loose leaf tea, made from the finest hand-picked leaves from the organic olive groves in Abruzzo, Italy. I’ve seen ladies picking tea leaves from the bushes in Sri Lanka and filling very large baskets which they carry on their back, a job that I am in awe of. Similarly, olive leaf tea has been made in Italy for hundreds of years, being prized for its health enhancing qualities. As well as tea, they also harvest the olives from the Mirabilia olive groves and press to produce extra virgin olive oil.

I followed the instructions which said a pinch of tea would make at least two cups of tea and to brew for about 5-6 minutes. It also said that the tea can be drunk either hot, tepid, cold or iced. I made a pot of tea to share with my other half and we chose to drink it hot. We both found it a pleasant tasting refreshing drink. I also tried refreshing the pot, as it said it could be refreshed once or twice, and deliberately allowed my cup to go tepid. Yes it was fine tepid, a bonus as I quite often get side-tracked. The flavour was weaker and more delicate as I had anticipated, and I still enjoyed it, although my other half found it too weak. I also appreciated how bulky the leaves were, very visually attractive especially compared to the powdery contents of most teabags. The pack came with a reseal label, but I found the packet tore when I opened it, so I was unable to reseal it properly, so I tipped the tea into an airtight container instead. 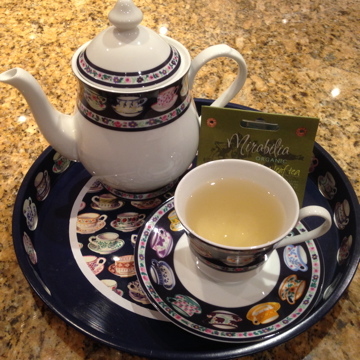 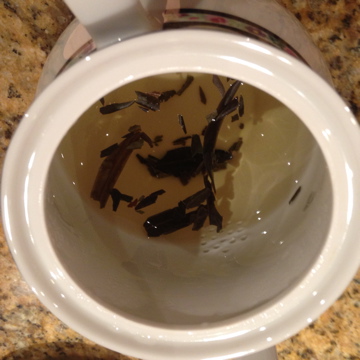 Take a look inside the teapot

Also olive leaf tea leaves can be added to a marinade, especially for fish, or used in a spice rub to season a variety of dishes.

A 30g packet of Mirabilia organic olive leaf tea currently retails for £4.69 and comes in three flavours, the original olive leaf tea that I tried and also variants with organic pomegranate and lemon and wild mint. You may purchase instore at branches of Booths and Whittards of Chelsea plus other stores or online. As you only need a pinch, the 30g packet will make lots of cups, so the price sounds fine in my opinion. I highly recommend this product. 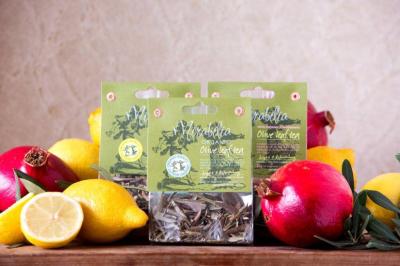 And I’m hosting a rafflecopter competition to giveaway a selection of Mirabilia organic olive leaf tea and olive oil to three lucky winners. Each prize will comprise of three packets of tea (one of each flavour) and a 250 ml bottle of their organic extra virgin olive oil.

Enjoy tea? Here’s another tea review I did back in 2013 of the Butterfly Dance Blooming Tea and Oolong Ginseng Tea Cubed.

Disclosure.  This post is a review of a product I was sent for free.  All opinions are my own.